Nets on an 8 month old vineyard? You have to be joking. Keep an eye out for the next insane installment of DAW.

I can’t stand it.  It’s like killing off one baby to ensure the survival of the other, but which one do I choose?  The eldest?  the youngest? The strongest?  The tallest?  Agony, guilt, it’s all there and finally, when you pluck up your courage, close your eyes and do the deed, there are thousands of others waiting to be cast out of the gene pool in order to achieve a vinous master race.  Cuvee Aryan here we come.  (Well it is Chardonnay.) 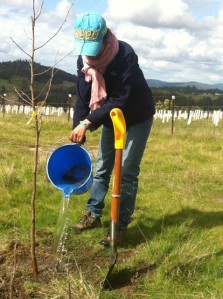 I have always felt that a project like this must be more than just vines (shock horror!) and that the whole property must have a wow factor.  So with this in mind, and it having been hours since we planted anything, the poplar trees were planted last year, (see out of the nursery) on the south side of the vineyard.  The north side, where the entrance drive will eventually be, requires something shorter; tall enough to provide a wind break but not shading.  Not wanting to waste an opportunity to produce something useful, we have decided on an avenue of various nuts and olives.  Almonds are in, as are some hazelnuts.  Ironically, (as this property was originally destined to be an olive farm,) I have no olives at the moment so they will have to wait.

I know there is still a long way to go, and arguably there always will be, but still I feel fantastic and excited about what we have achieved so far.  I wonder how many people in life can say they built their dream?  Well mine is built so I thought I would try to tell the story so far with a few pictures.  Enjoy.  I have.

…in fact pretty much everywhere. But strangely, they are pains I can derive some satisfaction from as it means that this place can finally be called a vineyard. A third of the vines are in and going strong.

I came across this beautifully written blog from Scalawine  (click to read) which has some good insights into the virtues (or otherwise) of various classifications of producers in Champagne.  In particular, their support of Domaine or Single Grower Champagnes clarifies many of the decisions made on this vineyard.  A great read for a bad weather day…and believe me, this is a bad weather WEEK!!

The count down is on to planting and the team is all lined up for Saturday.  I’ve been pushing as hard as I can to get enough wires up, pipes laid, fences run.  NOW it decides to rain?…and blow…and everything else.  So close now and I’ll be stuffed if the weather is going to beat me but the weather man says more of this to come. 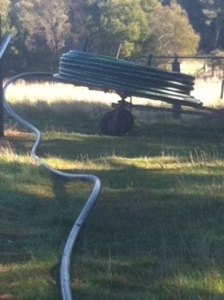 And I was glad of a rest from straining end braces (and my back) when the poly for the main and sub main lines turned up along with a ripper/pipe layer.
Spent Thursday afternoon laying out the lines, (well it was a beautiful day,) and, after a morning on the braces, Craig turned up with the tractor. I think nothing so far has gone as smoothly 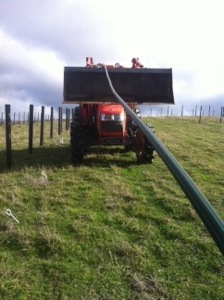 Think that counts as a successful day.

I came across this nicely researched article on Champagne Aubry which I thought worth sharing.  They too have planted all seven permitted Champagne varieties although it is shocking to see how little Arbane is in the world.  Hopefully, I can help to rectify that.  Think I ought to get in touch with them!

Well, they’re in and it feels good, but there were some moments of real concern.  Had I chosen the right posts; were they strong enough for ramming; did it matter that they couldn’t be pointed?  In the end, all it took was a good operator with good experience and rain; lots of it.

The 8’x5″ end posts are all pre-drilled and provided the biggest challenge.  With the delays meaning installation didn’t begin until after Christmas, drying soils and some rocky patches slowed things up.  The 100mm augur bit should have been ample but the difficulties of accurately drilling at a 30 degree angle resulted in a change to vertical posts.  While possibly not as strong in design, the upside is that the posts are now 900mm in the ground which we considered plenty strong enough when combined with the 40″ ground anchors.  On the other hand, trying to bang them in so far resulted in a worrying attrition rate and unacceptably high costs.

In fact, so great were the concerns, that I put a stop to proceedings until I could think of some way, (or someone,) to do it better.  I was resigned at this point to having to pre-drill every hole, even for the 3 1/2″ line posts, with frightening cost implications.  Eventually, pouring out my woes to a mate in the south eventuated in him making a call to someone who knew someone who was away at the moment but might be able to help when he gets back …etc…etc. It turned out that he could and, after many more delays, he did.  Not only that but, after so much rain fell in April that I was worried about getting onto the site at all, by May 17th, all 620 line posts were in with no pre-drilling and with the loss of only one; a pretty incredible outcome.  Love your work Ian Brown.