OK!  So the plan WAS, if you remember right back to April, that after giving the whole site a thorough discing, all it would need in Spring was a few quick passes with the harrows and everything would be beautifully smooth, clear of grass and weeds and ready for planting.  That of course was before the record busting rains in Sept/Oct produced such vigorous growth that I’m beginning to think that Jack & the Beanstalk might have some factual basis.

In fact, 5 passes with the big stump jumpers still didn’t do the trick and the upshot is a change of plan.  We will simply spray off the rows and leave the rest.  At least there is less rush to establish an inter-row cover crop and, as you can see from the picture, the whole slope is now beautifully graded….and nothing but blue skies at last. 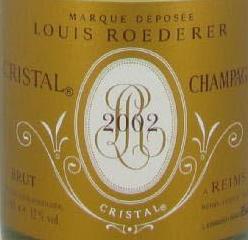 It is true that I often need to remind myself why I am doing this and if I can explain it to you, then maybe I can work it out for myself. So I will try.

On occasions, I admit to being a fan of unmemorable wines, wines that don’t demand attention or interrupt the otherwise really important conversation.  And I mean it, honestly I do, as much as, when a lot younger and hopelessly intent on saving the world, I meant it when I said that I would never eat foie gras because it was cruel, inhumane and absolutely BLOODY DELICIOUS!

So a little while ago I went to a friend’s 40th.  A whole bunch of us, who should have perhaps displayed a more responsible enjoyment of the picks of our combined cellars, treated some venerable labels as if they were innocuous ten dollar bargain bin specials.  Many, it’s true, slipped by without a detailed tasting note; a few stuck their heads up above the crowd and demanded that some memory of them remained the next day.  But somewhere in the priceless treasury of great wine, I found myself with a glass of Louis Roederer Cristal, a champagne which the vast majority of people in the world will go to their grave never having tasted.  This is a scenario which we should avoid at all cost…and it will cost.  Lots!  The current vintage will set you back up to $400.  Can a mere bottle of wine be worth that?  Can it deliver all by itself an experience equal to a whole evening at Tetsuya’s or a season ticket to the Opera House or perhaps a weekend driving super cars around Mt Panorama?  Hard to say.  Every experience is shaped by place, time and company and is impossible to replicate.  But for this drinker, on a befuddled afternoon behind the closed doors of a small east Melbourne restaurant, the lights flickered, the noise receded and perhaps even the earth moved as, with two meager mouthfuls, I experienced such a revelation, such a crescendo of flavour and texture, that it put every other wine I had ever tasted into a new context.

I know they don’t look much, but to the best of anyone’s knowledge, these are the first Petit Meslier cuttings EVER to arrive in Tasmania.

That’s one for the history books. 6 down and only 1 variety left to find, (and I hope to have more news on that by the middle of next year.) 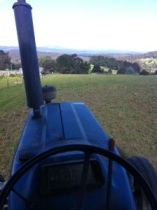 Note to self – not good to look at view too much when driving tractor anywhere near the dam!

The best laid tarps of mice and men…       Right there will do it.  Just the place for all the posts which are on their way at last….waiting………waiting………

…here they are.   (2 hours late but not to worry.)   First problem: – apparently low range 4WD and a diff-lock doesn’t count for much these days as truck can’t get through the gate.  Tried forwards.  Tried backwards.  In the end, the only way to go was sideways…

…so parked in the neighbors driveway and craned them over the fence.  The tarp had to go but, seeing these things are supposed to last at least 50 years in the ground, I figured that a few weeks above ground won’t hurt them. 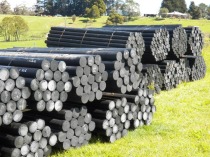 And there they are…620 line posts and 200 end posts.  Unfortunately, there isn’t much we can do with them until the ground anchors turn up from Qing Dao in around 30 days time.  At least that will allow time to get everything ready…I hope.

One of the variables we considered when the sticks were slow to strike was whether taking cuttings soon after vintage and before any significant frosts would affect the level of stored carbohydrates.  Of course, the need to access producing blocks before pruning dictated the timing.  However, the rapidity with which these CH277 cuttings have thrown roots is interesting as they were taken just prior to bud swell in early spring.  (Note to self – much more pleasant AND possibly more effective to take cuttings when it’s warm and sunny!)

I have a confession….With around 6,000 cuttings in the nursery, all the sore hands and aching backs it took to collect them were nothing to the hours of worry and angst brought about waiting for them to callous and throw some roots. To be on the safe side, we ran controls of every kind: different soil mixtures, different temperatures; inside/outside; and so, when ABSOLUTELY NOTHING happened, your’s truly could be seen pacing the floor, tearing his hair out like a nervous expectant stock-broker.  Advice and reassurance were sought across the state, (thanks Fred, Shane and AP) with plenty of the former and not enough of the latter.  We agonized over whether they were warm enough, cold enough, if they had enough sand in the mix, if there was too much sand in the mix, if poppy meal had been a bad idea after all, if they were too wet, too dry, or whether we’d taken them too early,…

In the end, Lee rolled out the heat mats and rotated the potted cuttings in batches, with the result that most are taking around a week to go from stick to rootling…in fact, any longer and the size of the root ball is going to make it tricky to get them into the planting trays.

Of course, in the meantime, the rain has finally eased, the frosts have (almost) ceased and we have even had a few days of beautiful Spring sunshine.  In response, the cuttings are now firing at both ends and have not only sprung into leaf, but some, (yes, I’m talking about YOU pinot blanc,) have even thrown flower spikes, as you can see in the picture.  At this rate, we may be the first vineyard to take in a crop BEFORE the vines are actually planted.  (Terry Pratchett fans may call to mind the existence of wine made from REANNUAL grapes planted the following year. The snag was that you got the hangover the morning before and had to drink a lot to get over it.)

For the record, I am a strong believer in community, including shopping locally whenever possible.  Sometimes I know I pay a little extra but then I often save on the time and fuel it takes to travel for the sake of a small saving in price.  Perhaps because my family ran a village store when I was little, (which eventually succumbed to the power of big supermarkets,) the “use it or lose it” mantra is one I spout to all and sundry when it comes to supporting local business.  But how far am I supposed to go?

For example: the other day, I dropped into my local hardware store in Exeter to inquire on the price of trellis wire.  I had done some homework on-line as I will need a total of around 30 km to complete the job and, needless to say, every cent counts.  The best price I could find trawling the internet was easily matched by this awesome local business, justifying my suspicion that, in many cases, we only think we get a better deal from the larger suppliers.

As I have said in an earlier blog, (see A dog, a compass and a measuring wheel,) my posts are being supplied by the terrific guys at Woodshield.  While a QLD based outfit, they support our local industry by being associate members of the Tamar Valley Wine Route and, of course, are the only suppliers of these particular chemical-free posts which I was anxious to use.  No problem so far.

Now for the rub.  For various reasons, I have decided to use earth anchors to brace the trellis, rather than the alternative box assembly which uses more posts and therefore should be more costly.  I was horrified to be quoted around $37 a piece, plus delivery, by the nearby branch of a nationwide rural supplies group, and that for something that was barely sufficient for the purpose.  In addition, they wanted to charge me $13 each for a strainer kit (length of wire rope and a gripple)  meaning the cost of the anchors would have exceeded all the other trellis costs put together. I seriously considered a change in strategy but thought I would give it one more go and look further afield.

MUCH further afield.  To cut a long story short, I have purchased an over-engineered anchor of the same design and material from a manufacturer in Qing Dao, China.  The total price, including freight to the vineyard, is …  well let’s just say that the total cost of my end assemblies; posts, strainers, wire, gripples, the lot, is now cheaper than the price quoted me for just the anchor.  I think I just found my limits.

SWINGS – In the words of the incomparable Spike Milligan, “Spring has sprung, the grass has riz,” which serves to remind me both that time is marching on and that it has been a little while since my last post.

ROUNDABOUTS – Despite the blossom up and down the valley and budburst imminent, Liawenee on the Great Lake had the lowest ever recorded temperature in TAS last night and apparently, this morning in Hobart was the coldest since 1959, with Mt Wellington summit closed due to snow.

SWINGS – Thankfully the Tamar Valley is proving a little less extreme.  In fact, two days last week taking cuttings from the equally incomparable, (albeit for different reasons,) Dr Andrew Pirie’s vineyard saw me almost down to shirt-sleeves, despite Andrew and his partner Liz looking all set for a trip to Mawson Station.  The result was that around 600 cuttings each of Pinot Meunier and Fromenteau Gris, (the Champagne synonym for Pinot Gris,) have now taken their place in the callousing boxes, in addition to a few hundred Chardonnay clone 277 on advice from Andrew.  This should have meant that we have collected 6 of the 7 permitted Champagne varieties, leaving only the elusive Arbane for later.

ROUNDABOUTS – However, there has been some disappointing news from Eden Valley that there were not as many viable Petit Meslier cuttings as we thought.  While we still hold out hope of a small number being available, it will unfortunately mean a change to the current planting plan.

SWINGS – While Meslier may not feature prominently in the vineyard this year, it has certainly improved it’s standing in the cellar, with a case of “homework” turning up in the mail from the very splendid Jim Irvine.  I will certainly make study a priority this Summer.

It is official. The dams can hold no more. While we may whinge and moan about the non-stop rain for the last fortnight, we should be extremely grateful.  Not many places in this part of the world would turn down the chance of full dams. But being the generous soul I am, it can now go away and fill up someone else’s instead!